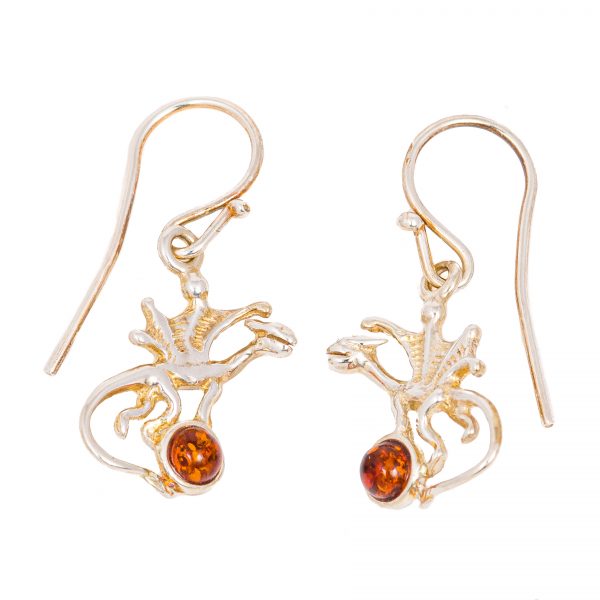 These uniquely designed pair of earrings by Mark Kostiak are made in Wales from Sterling Silver and Baltic Amber.

The Dragon appears in the folklore of many world cultures.  It is a large fearsome serpent like creature often representing evil.

This particular piece of jewellery was made in Wales where the first mention of the Welsh dragon is in the fifth century when it was adopted by the kings of Aberffraw as a symbol of power after the Romans left Britain. Later it became known as the Red Dragon of Cadwaladr used by the king of Gwynedd.
In the Historia Regum Britanniae written by Geoffrey of Monmouth in the 12th Century the dragon is linked to the Arthurian legends. King Arthur's father was Uther Pendragon which means Dragon Head. The battle of red and white dragons is recounted also.  It is presumed the red dragon for Wales and the white for England, the English trying to dominate and conquer Wales which they eventually occurred in the 1200's under Edward I.

Be the first to review “Dragon Earrings, Sterling Silver and Amber, Made in Wales” Click here to cancel reply.