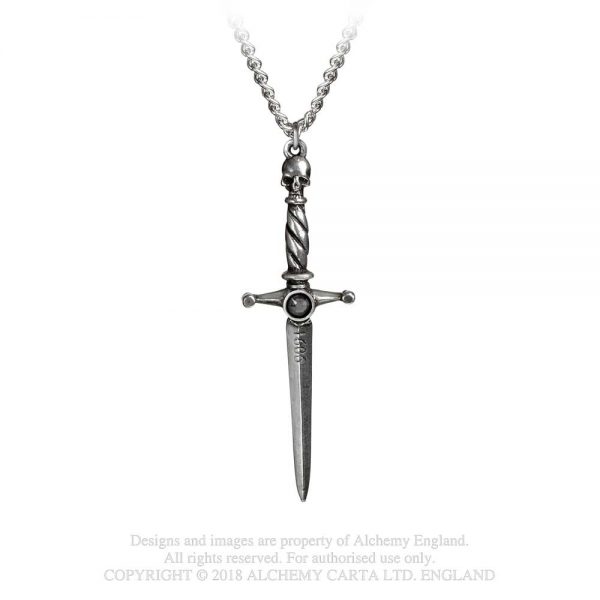 Beware the seduction of ultimate power – megalomania will bring about your own downfall.

The blade is engraved with “1606”, the year that Shakespeare wrote Macbeth, a bloody tragedy of the brave Scottish leader driven by ruthless ambition to regicide, murder and tyranny.

A small English pewter pendant of a late Medieval-style dagger with a small, black cabochon on the hilt and an engraved blade.

Obviously this pendant celebrates Shakespeare's MacBeth murder of Duncan but the truth is quite different.

Duncan succeeded his maternal grandfather Malcolm II as King of Alba (Scotland). His wife from Northumbria (England), became the focus of much of his activity – bore him at least two sons who both ruled after him; but not before Macbeth had intervened. Macbeth ruled Moray, his status either that of a regional King, or a Dux, a powerful warlord.

In 1039 Duncan raided Northumbria, laying siege ineffectively to Durham . It may be that this fiasco sparked Macbeth’s ambitions: the two parties clashed, and on August 14, 1040 Duncan was killed, possibly even by Macbeth’s own hand, his own men having turned against him. Macbeth seized the throne of Scotland, and then held it for 17 years before losing it to Duncan’s son Malcolm.

During MacBeth's reign life was peaceful and prosperous  and the spread of Christianity was encouraged.

Be the first to review “Hand of MacBeth Pendant – English Pewter” Click here to cancel reply.

This website uses cookies to improve your experience while you navigate through the website. Out of these, the cookies that are categorized as necessary are stored on your browser as they are essential for the working of basic functionalities of the website. We also use third-party cookies that help us analyze and understand how you use this website. These cookies will be stored in your browser only with your consent. You also have the option to opt-out of these cookies. But opting out of some of these cookies may affect your browsing experience.
Necessary Always Enabled

Any cookies that may not be particularly necessary for the website to function and is used specifically to collect user personal data via analytics, ads, other embedded contents are termed as non-necessary cookies. It is mandatory to procure user consent prior to running these cookies on your website.