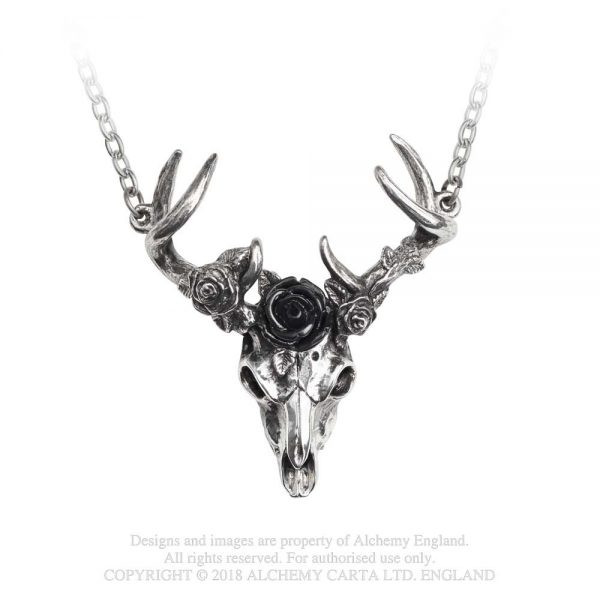 This stag (hart) reaches back into the mists of the Middle Ages, being the symbol of Richard II.

Also, the incarnation of the Elizabethan ghost, Herne the Hunter.

An antiqued English pewter stag’s skull with a rose garland about its horns, the centre one being of black resin

The white hart is the heraldic badge of Richard II who reigned from 1377 t0 1399. It is famously depicted on the Wilton Diptych in the National Gallery, London.

"This small, portable altarpiece is one of a handful of English panel paintings to have survived from the Middle Ages. Made for Richard II, King of England from 1377 to 1399, in the last five years of his life, it combines religious and secular imagery to embody his personal conception of kingship.

On the inside the King is presented to the Virgin and Christ Child by Edmund and Edward the Confessor, England’s patron saints, and his personal patron, John the Baptist. Richard holds out his hands to give or receive the standard with the red and white cross, the arms of Saint George. Christ raises his hand to bless the standard and with it, Richard’s rule.

Richard’s emblem of a white hart, or stag, is shown on the outside, and as badges worn by the host of angels. The King adopted this symbol from his mother, but it also acted as a visual pun on his name (Richart in French)."

Herne the Hunter is a ghost haunting Windsor Forest. He is said to have antlers upon his head, ride a horse, torment cattle, and rattle chains. This legend was first mentioned in Shakespeare's 'Merry Wives of Windsor'.

This website uses cookies to improve your experience while you navigate through the website. Out of these, the cookies that are categorized as necessary are stored on your browser as they are essential for the working of basic functionalities of the website. We also use third-party cookies that help us analyze and understand how you use this website. These cookies will be stored in your browser only with your consent. You also have the option to opt-out of these cookies. But opting out of some of these cookies may affect your browsing experience.
Necessary Always Enabled

Any cookies that may not be particularly necessary for the website to function and is used specifically to collect user personal data via analytics, ads, other embedded contents are termed as non-necessary cookies. It is mandatory to procure user consent prior to running these cookies on your website.