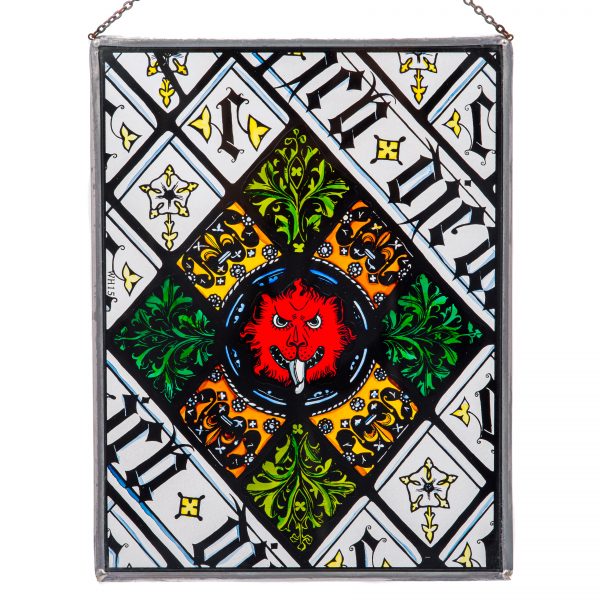 Hand Painted in Cumbria on the English/Scottish Borders this panel shows an Heraldic Lion’s face and Fleur De Lys decoration in a lozenge shape known as a Hatchment. The panel has a chain attached to the leaded frame, and includes a suction cup for hanging.  It is recommended to smear a little egg white to the back of the suction cup which makes a secure attachment to your window.

Please don’t hang in strong sunlight as the colours may fade over the years.

HERALDRY
The recording of Heraldry began in the 12th century when it was essential for a knight to be identified in battle.  The designs upon his shield would be a rallying point for his men when those designs were borne upon his flag.  The crest upon the knight's helmet would show where he was to his followers in battle should he become surrounded. Later Heraldry was essential to distinguish knights in tournaments. As well as knights, people of status could be granted a Coat of Arms. On the death of the bearer of the arms the first son would bear the same arms whilst subsequent sons would bear the same arms with a different mark superimposed. A daughter would bear her father's arms to show she was a daughter of a gentleman.
All British Coats of Arms are officially recorded at The College of Arms in London. In the 1400's Richard III established this corporation so Heralds could officially record all Coats of Arms.
HATCHMENT
It was common to paint a persons' armorial bearings on a wooden lozenge after their death and consequently displayed in the parish church.